Brian Yang is an American actor who recently plays Dr. Charles Fong in the 2010 remake of Hawaii Five-0.

Brian Yang, whom was born in Columbus, Ohio and raised in the bay area. Brian Yang (nickname-Wei) is a second generation Chinese American that began his acting career after he had attended the University of California (Berkeley) where he studied biology and dramatic arts. Most recently, he was the host for a reality show in China called Shanghai Rush - China's biggest budgeted reality show to date.

In addition to playing "Charlie Fong" on Hawaii Five-0, Yang has also starred in films such as The Man with the Iron Fists as Hyena, Quentin Lee's The People I've Slept With as Jefferson (Archie Kao)'s right-hand man (and was also an Executive Producer of the film), Alice Wu's Saving Face as Little Yu, Joan Chen's love interest, Michael Kang's West 32nd as Jahnkeh, and in the upcoming film, Someone I Used to Know, directed by Nadine Truong and written by West Liang, which he also produced. Yang was also the host of a reality show in China called Shanghai Rush. 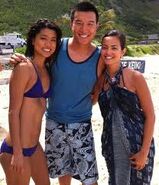 Add a photo to this gallery

Retrieved from "https://hawaiifiveo.fandom.com/wiki/Brian_Yang?oldid=34469"
Community content is available under CC-BY-SA unless otherwise noted.